With our lives getting more digital day-by-day, using a VPN service is becoming a necessity. If you’ve ever tried to find a VPN that meets your needs, you’ve probably come across keywords like “best” or “fastest.” In the VPN market, every service claims to be providing blazing speeds and guarantees they aren’t collecting your data.

It gets extra tricky when you’re trying to find a reliable free VPN service since every free VPN comes with a catch. Either it’s bandwidth limitations, the number of servers to choose from, inaccessibility of streaming services. In today’s article, we’ll go through everything you need to know before getting yourself a free VPN.

We’ve tested out 25 free VPN services and made a list of top 10 VPNs.

Let’s take a look at our top picks:

Although Atlas VPN was launched six months ago, it had already attracted widespread media attention. The product has featured in articles of giant media players, such as Reuters, Forbes, The New York Post, Fox News, PCMag, and many others. And, it has a 4.4-star rating on Trustpilot, a well-known consumer rating website.  The company is transparent in terms of how they make money, which is vital when it comes to free VPN services. The vendor offers free and premium service versions. The free version has unlimited bandwidth, but the number of servers is lower. The Premium version has 500+ servers.

Atlas VPN doesn’t monitor, track, or collect users’ online actions, which means they are working under the strict no-logs policy. Since they plan to live off premium version users, they won’t monetize your data and target you with ads. So, technically, getting a free version means getting fewer servers to choose from.

Premium unlocks streaming-optimized servers, which will allow you to stream in 4K any geo-restricted content. The service also supports using P2P applications.

Right now, the Atlas VPN app is available for Android and iOS users. The team expects to release Windows and macOS apps this summer.

Atlas VPN is still at the early stage of development. Still, it already offers military-grade encryption (AES-256), the safest protocols (IKEv2), a lot of servers, a strict no-logs policy, malicious websites, and ads block (SafeBrowse), and leaks protection. And it’s only the beginning

Typically, free VPNs put data caps, meaning your VPN usage will be limited. That’s where Atlas VPN stands out – even with the free version of the app, you can use the service as much as you like. It’s especially convenient for streaming or using torrenting applications.

👉🏻 Get Exclusive Discount On AtlasVpn Now

In the free version, TunnelBear provides free 500MB of data every month. You can choose between servers in 22 countries, including the US, Australia, India, Germany, and more. The TunnelBear service is considered to be one of the fastest services in the free VPN market. It’s a perfect option for streaming; however, the bandwidth may not allow enjoying binging on your shows fhttps://atlasvpn.com/or hours. The extraordinary, easy-to-use app design is a huge bonus, too. 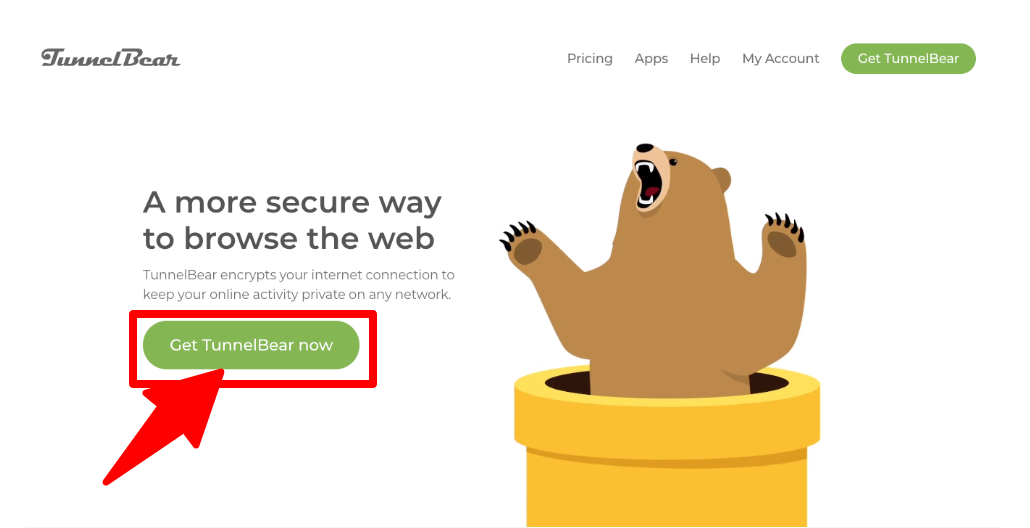 Long story short, the difference between the free and premium versions is just a restriction on bandwidth. That’s why it is our second choice: Tunnelbear has a unique, user-friendly interface with quite a few connection points to choose from.

👉🏻 Get Exclusive Discount On TunnelBear Now

ProtonVPN is a swiss-based service that doesn’t put any data limits, runs on reliable encryption protocols, guarantees a no-logs policy, and offers privacy features — all this for free. The major drawback is the limited number of locations to choose from — Netherlands, Japan, and the US.

Few connection points can harshly decrease your speed due to servers being regularly overloaded. And, you’ll only be able to connect on a single device at the time. Finally, ProtonVPN servers don’t support P2P traffic. Generally speaking, ProtonVPN is made for those who are serious about online security and anonymity.

🔥Get Upto 20% Off On ProtonVPN Now

Windscribe also offers free and premium tiers. However, the free service has specific limitations. If you register and share your email address — you’ll be provided to use 10GB/month. If you don’t provide your address, you’ll have to agree with 2GB of data per month.

You can choose between 20 free VPN locations, whereas paid plans unlock servers in about 50 countries.

In its free version, Windscribe has some great features, such as Split Tunneling, which allows you to exclude certain apps from the VPN tunnel in case you don’t wish to secure them. Split Tunneling is a unique feature in the VPN market – only a few VPN services offer it.

The free version of Hide.me will limit you to 2GB of data per month, which isn’t ideal but good enough for casual browsing. The service limits you to establish a secure VPN connection on one device at the time. There are five server locations to pick from — US (east and west coast), NL, CA, and SG.

With the free version of Hotspot Shield, you can get 500MB of data per day (~15GB/month). It’s also super easy to get started since you don’t have to sign up, put your email address or credit card details to use the service. The major drawback is that the app picks a server for you automatically. So, you won’t be able to choose a location yourself, which is necessary if you’re looking to access geo-restricted content.

Hotspot Shield monetizes the free version by pushing ads to its free version users. If you get easily annoyed by intrusive ads, you’ve been warned!

👉🏻Get Started With Hotspot Shield For $7.99 Now

Avira is a reputable name in the cybersecurity industry, differently known as Avira Antivirus. In 2016, the company launched its VPN service – Avira Phantom VPN.

Avira’s Phantom free VPN Android service gives a monthly data allowance of 500MB. You’ll be able to pick a server in any of the 40 available locations, which is quite a large number.

The sign-up process is hassle-free: it doesn’t require entering any information; you only have to download the app. With both free and paid versions, you can use the service on multiple devices. All in all, the free version is pretty solid, but low data caps might be a deal-breaker for those looking to use a VPN daily.

SurfEasy provides 500MB a month, connecting on five devices simultaneously, access to 16 countries, and decent speeds. You can get more free data if you recommend the service for your friends or family. SurfEasy will let you use torrenting without cutting your connection speeds. It has a built-in algorithm that prevents advertisers from tracking you online. 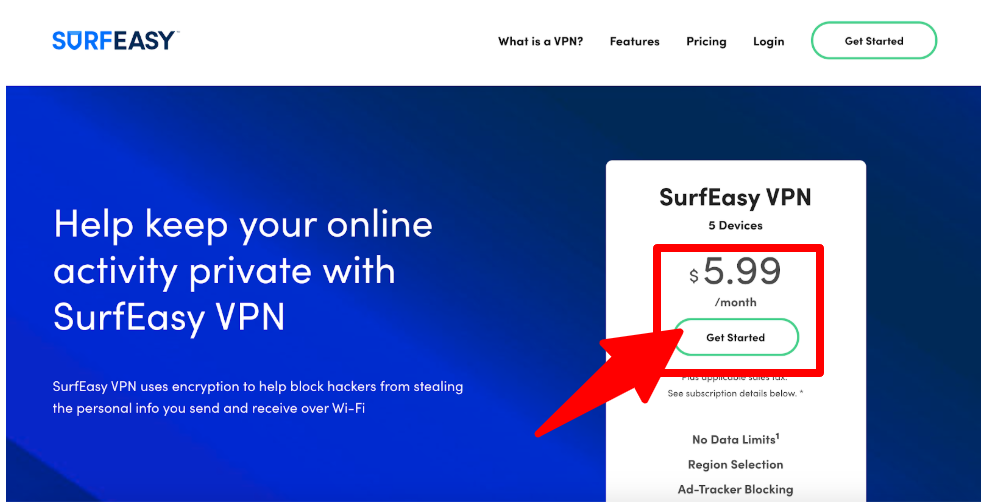 They state that they have a zero-logging policy. Still, there’s a concerning statement on their Privacy Policy page. “We may collect and disclose personal information, including your usage data, to governmental authorities or agencies, including law enforcement agencies, at their request or under a court order, subpoena or another legal process, if there is a good faith belief that such collection or disclosure is required by law.”

🔥Get Started With SurfEasy For $5.99 Now

Like most VPN services,Speedify is primarily interested in getting you to buy the full-featured version. Nevertheless, the free version gives a lot of great features, too! It has Channel Bonding technology, which can slightly increase your connection speeds. But, at the same time, it will use twice as much data. 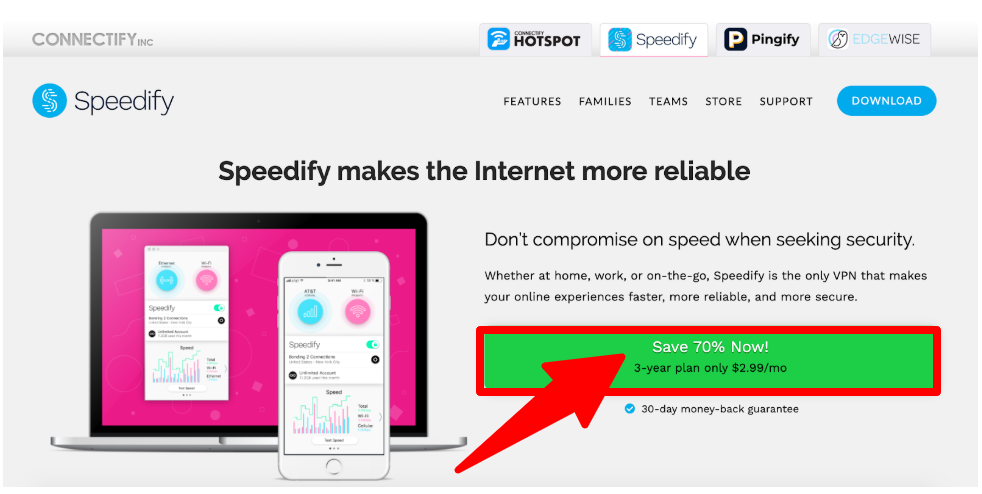 The vendor is committed to keeping the free version ad-free. It’s suitable for streaming, but the free data cap might not be enough — Speedify provides only 2 GB of data for a month.

Betternet has made its way into our top 10 VPNs list because of the user-friendly design. The app has an on/off toggle with an option to choose from 9 different server locations — all in the US. Betternet offers 500 MB of free data per day.

But, it’s quite concerning that the vendor collects more useful information that is ideal for privacy. Betternet may even share some of the data with 3rd party service providers. If you use the free tier, you may be seeing a lot of ads. The servers also don’t support streaming. Hence, Betternet is not a service we’d recommend for those looking for robust privacy and security.

👉🏻Get Exclusive Discount On Betternet Now

All of the 10 VPN services included in our list have their own advantages, capabilities, and limitations. If you don’t want to invest in a high-end service, here you should find a service that meets your needs. Nevertheless, we strongly advise you to choose a reputable provider that respects your privacy and is secure enough to use.

That’s why we picked Atlas VPN: it protects you with military-grade encryption, doesn’t restrict your actions with data limits, has a user-friendly interface, and unlocks Netflix. What’s not to like?