How To Find Top Adult Ads From JuicyAds & Other Ad Networks

Adult advertisement is a difficult job. An advertiser has to really understand his audience and one way to do it is to understand the techniques used by successful competitors and know their deepest secrets.

AdPeriscope is a native adult ad spy tool which is designed for this purpose. As the moniker of ad spy suggests AdPeriscope spies on other advertisement networks and allows the user’s business to boom by providing information on what ads are needed to get people’s attention.

Make Your Adult Campaigns Effective : How To Find Top Adult Ads From JuicyAds & Other Ad Networks With Adperiscope 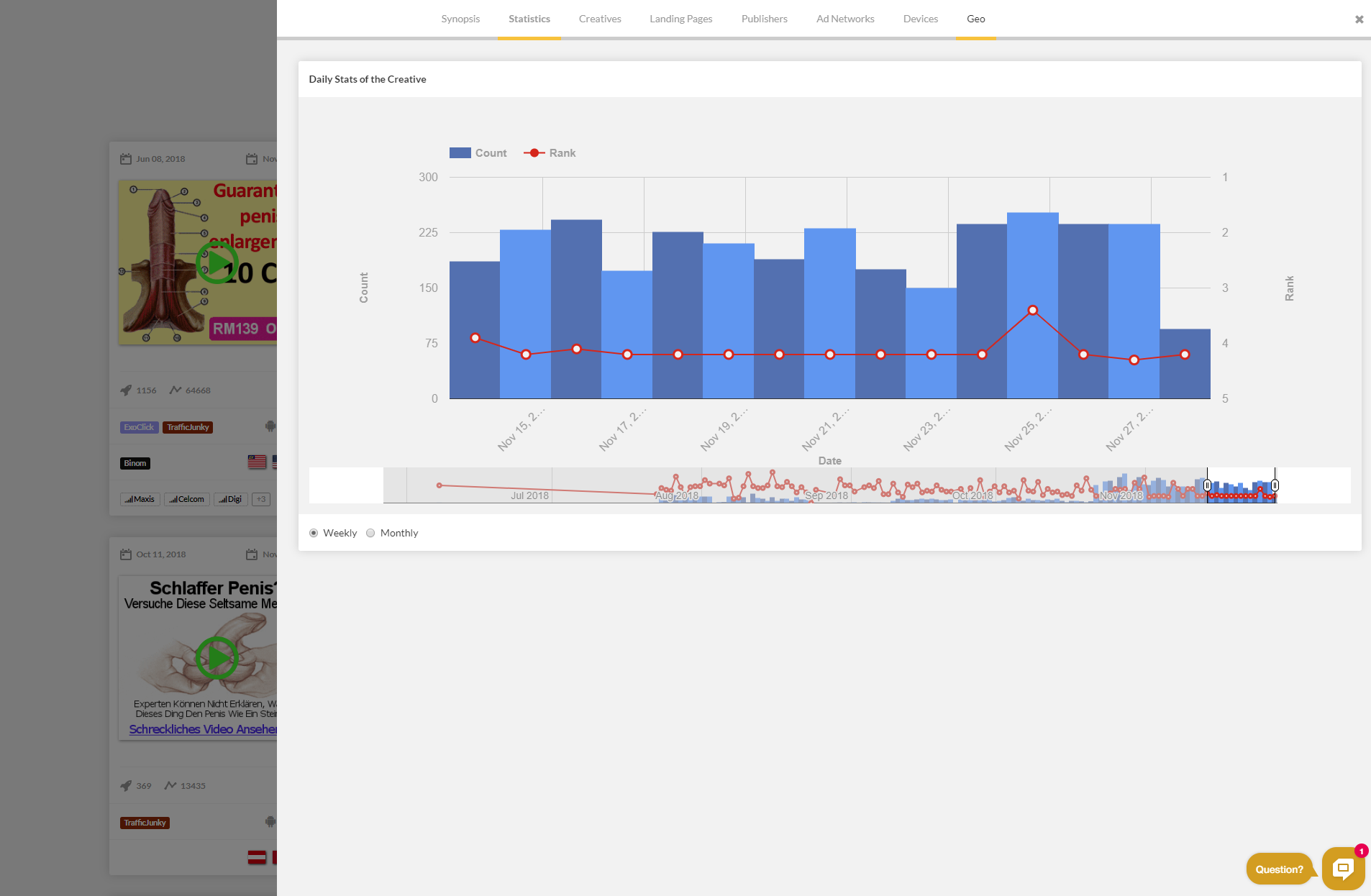 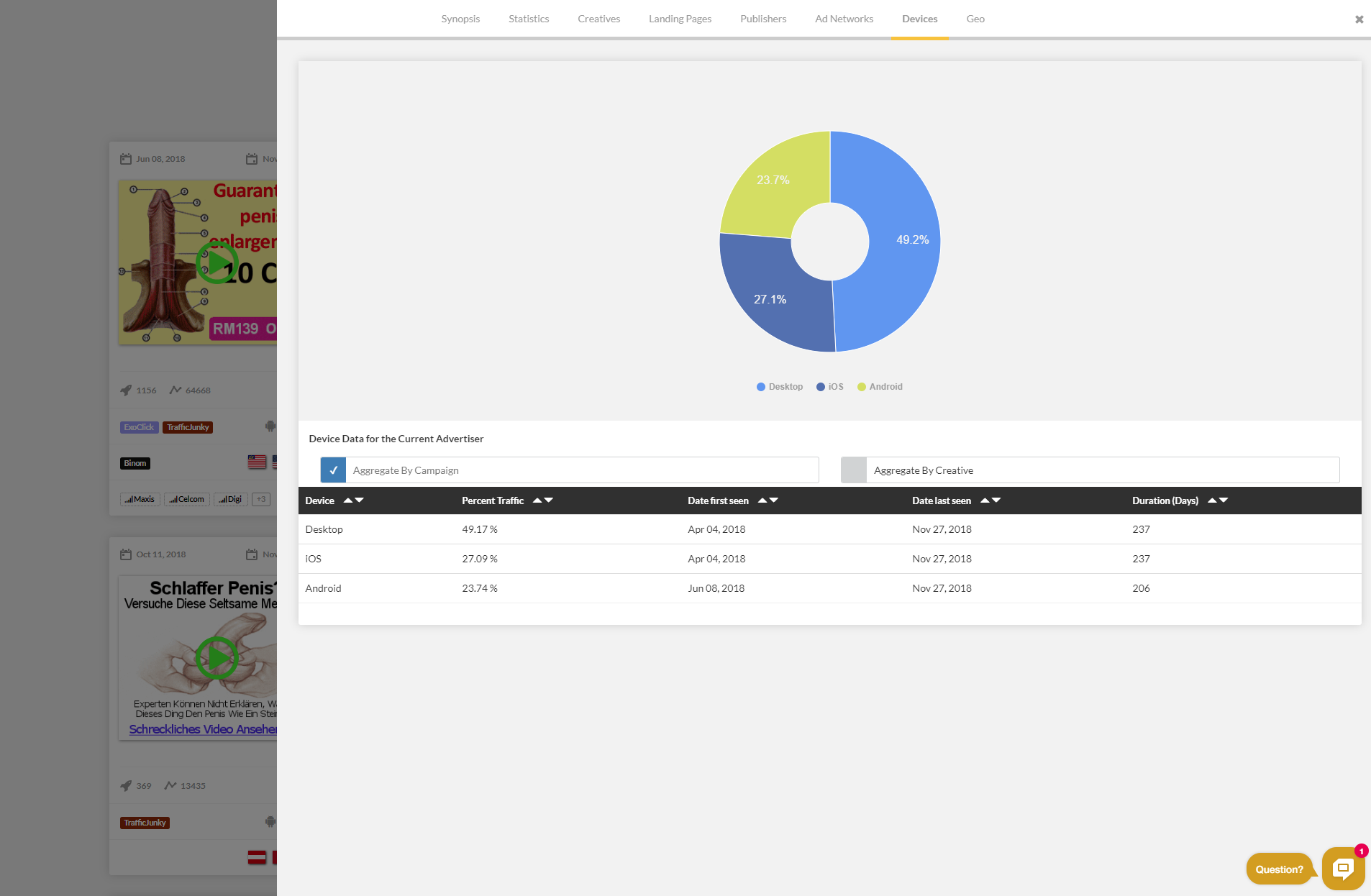 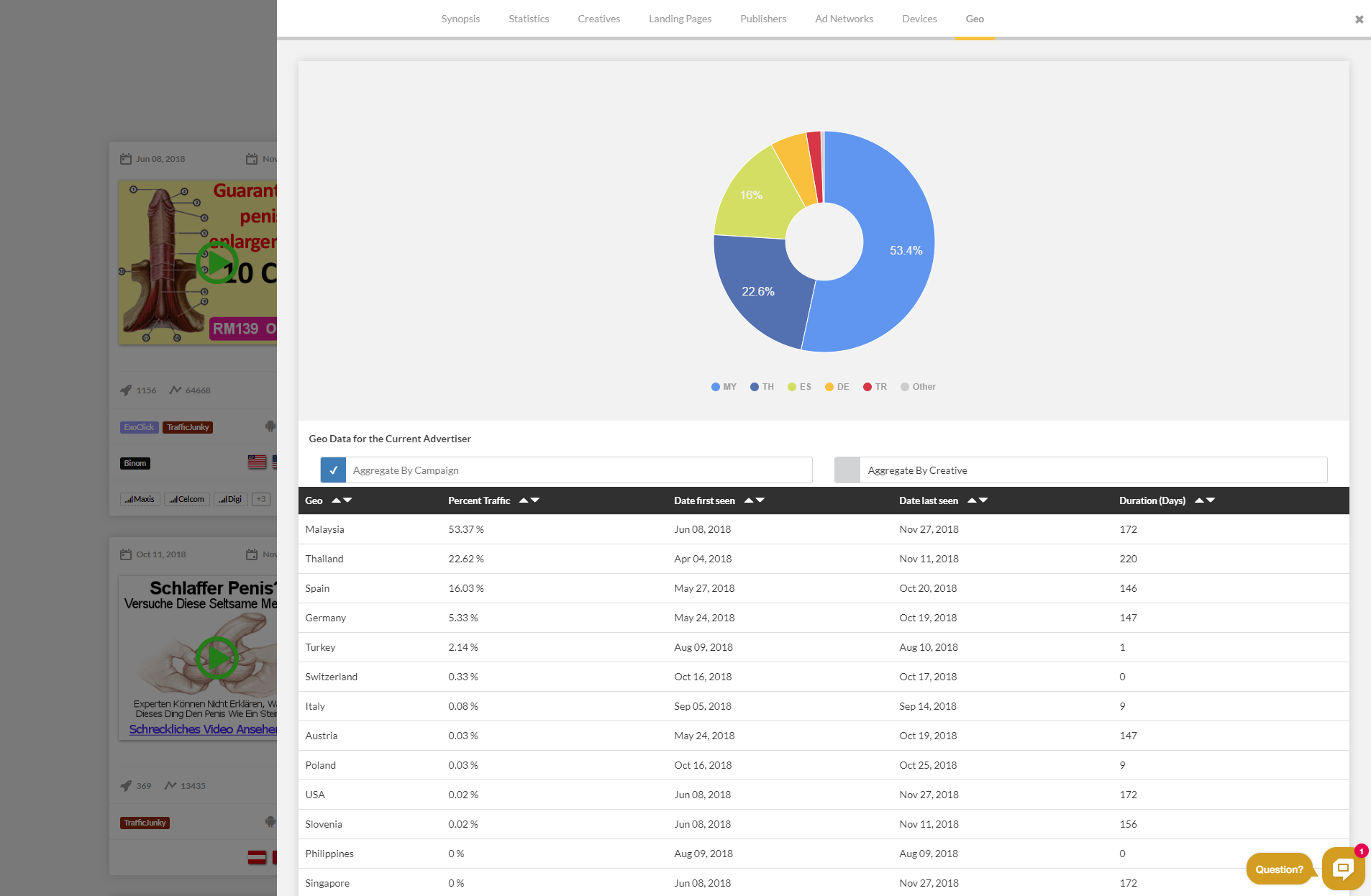 AdPeriscope helps its users to build campaigns by looking at other effective ad campaigns in the business. It saves its users marketing dollars by spying on other adult advertisement networks and the user gets access to all that information.

AdPeriscope has ad networks in 56 countries and across 152 mobile carrier and has a leg up on its competitors. The advertisement networks are some of the best in the industry with several of them appearing in adwikia.com as the top ten adult advertisement networks. The list has ExoClick, EroAdvertising and JuicyAds which are part of the advertising network of adperiscope.com and speaks of its high quality ad network which is crucial for an ad spy tool. It comes at a reasonable price of just $90 which may come as a surprise to some users who may have expected to be unaffordable. There is fantastic value on offer here.

Some of the mobile carriers which are featured are the Indian giant Airtel, the American conglomerate AT&T and India’s biggest carrier Reliance Jio. There are also several other big carriers such as Vodafone, BT, T Mobile and numerous others. These carriers are from countries including Brazil, Mexico and Vietnam.

The major carriers in the major markets for potential customers are covered by networks such as TrafficJunky and TrafficHaus apart from the previously mentioned top of the industry networks, to ensure that there is dependable and sustainable network of publishers available to users to their convenience and to meet requirements. 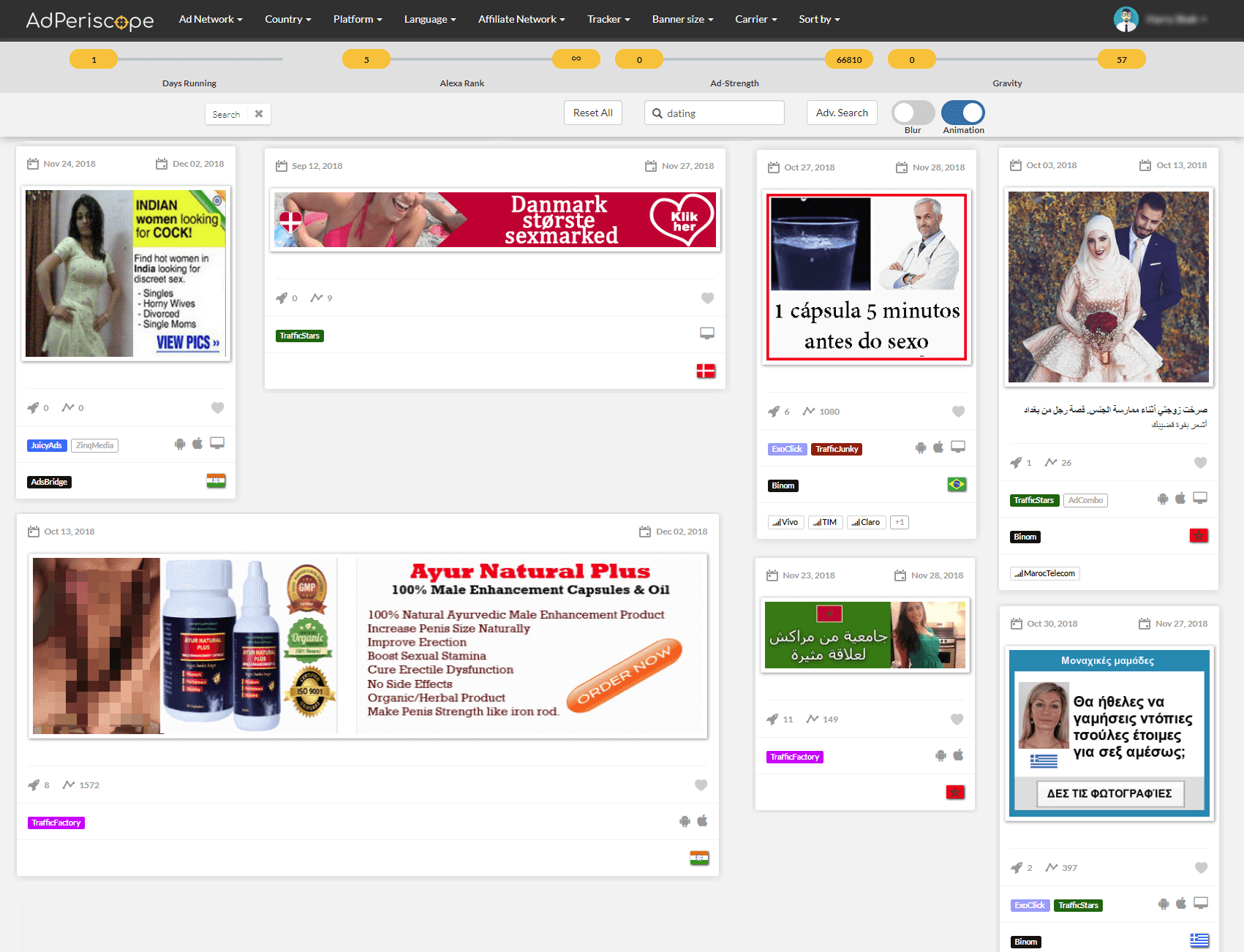 AdPeriscope has a plethora of amazing features which make it the best adult ads spy tool in the industry for $90 a month which is quite affordable as it has premium features. 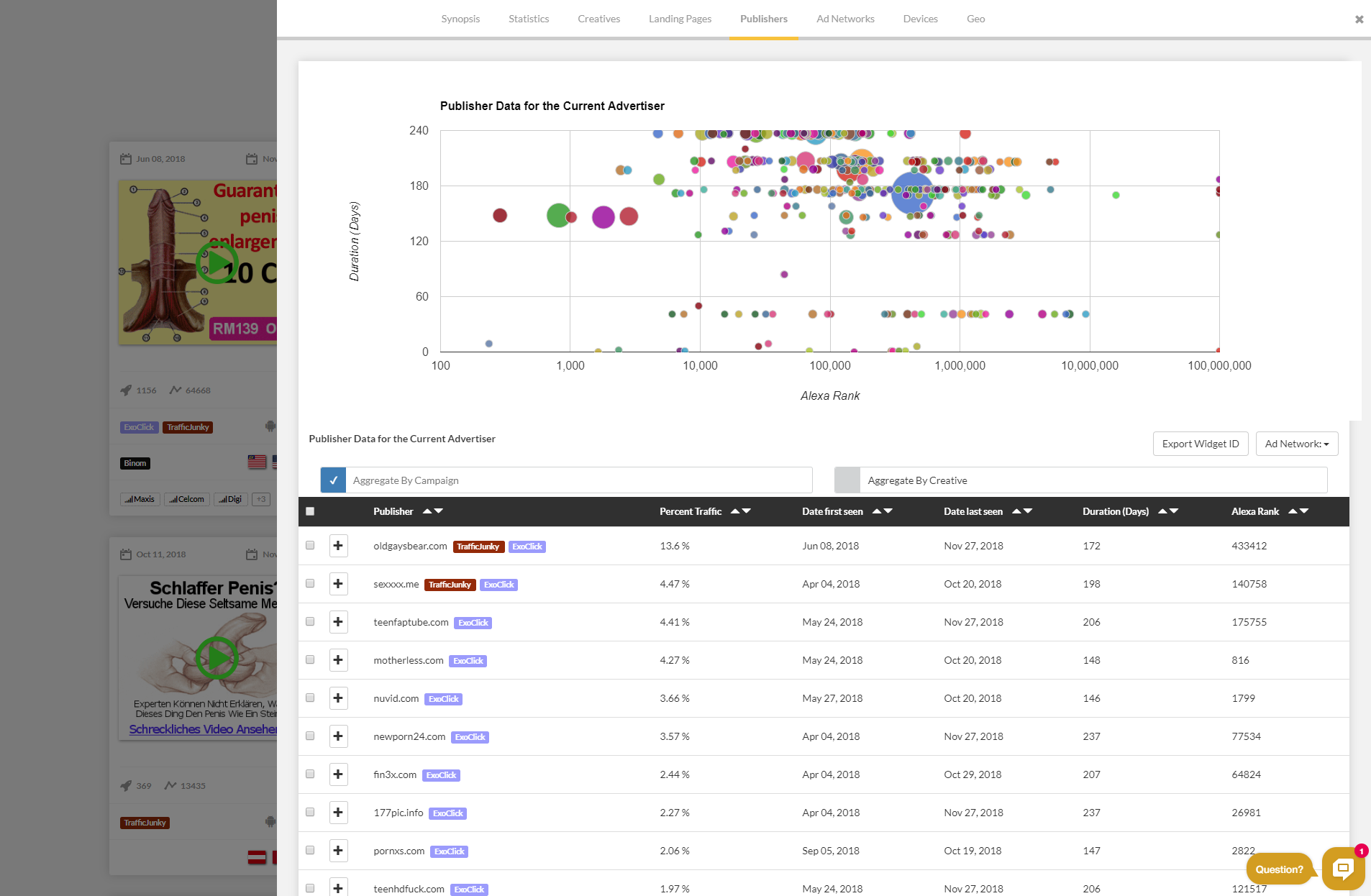 The utility of adult advertising campaigns is to find banners. AdPeriscope can read text in banners and these banners can be searched with a keyword and the software will take care of the rest. It has access to the major adult ad networks and the largest collection of banners more than its competitors which gives it a distinct advantage and it allows the user to uncover most popular sites to run ad campaigns on which will give them the highest return on investment where viable.

There are no price tiers for different packages like there are in other ad spy software. The problem with price tiers is that lower end tiers get the short end of the stick in terms of features which makes them effectively useless and the single subscription here has their high tier features for a mid tier price. There might seem to be a problem for those looking for cheaper options who will look at other software but they don’t have the required features to make them worth even the lower price as they limit access to several networks they promise and to regions beyond USA.

These networks constitute the software itself and limited access to such networks reduce the effectiveness of the software as an ad spy tool and it is common among other such software.

It is $80 a month for everybody for the full package which is good as it makes it more convenient and delivers the goods necessary to make it a worthwhile software which enhances ad revenues.

Arijit is a Blogger and Freelance Content Writer from New Delhi, India. He is a budding Environmentalist and Creator/Editor-In-Chief of "Envibrary". Outside blogging, he is a Musician and passionate Photographer. You can Follow His Blog Website.