0
Ron Howard Masterclass Reviw
I have always been curious about directing, how scenes are shot, and how the movies are made is something that always had my attention. Even though I am not an aspiring director, this masterclass has taught me many lessons about the art of directing which will always stay with me.
Price: $90
Our Score 9/10
Try Now!

In this post, we have shared Ron Howard Masterclass Review that includes all detailed insights, the Masterclass about Direction by Ron Howard, so let’s get started…

Bottom Line Upfront: Ron Howard is an amazing director in the Hollywood industry and he has won Oscar for his direction in Apollo 13. According to him, the direction is an art and a director must think like an artist. To teach the edges of directing, he has created the Masterclass about direction. If you’re looking to make a career in direction then enroll in Ron Howard Masterclass.

You all must be familiar with Ron Howard. You might know him as an Oscar-winning director, a producer, an actor, and one of Hollywood’s great storytellers.

Ron Howard is a legend on both sides of the camera. As a child, his portrayal of Opie in The Andy Griffith Show and Richie Cunningham in Happy Days launched him into every living room in America. 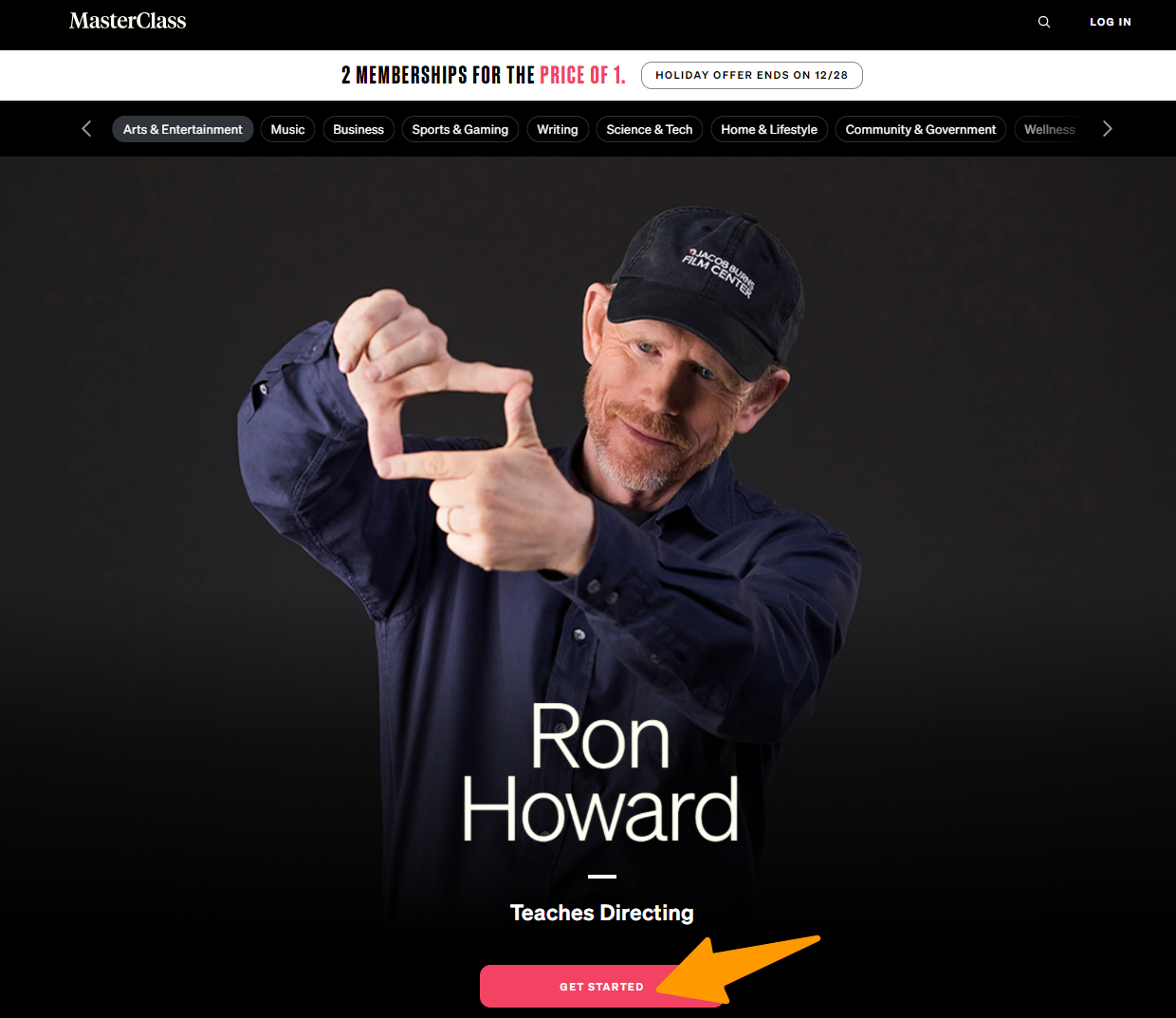 After leaving acting to direct, Ron developed an extensive directorial résumé which includes Cocoon, Splash, Parenthood, Apollo 13, A Beautiful Mind, Frost/Nixon, Solo: A Star Wars Story, and the beloved TV series Arrested Development. In addition to being a box office blockbuster, he is a two-time Academy Award-winning director. 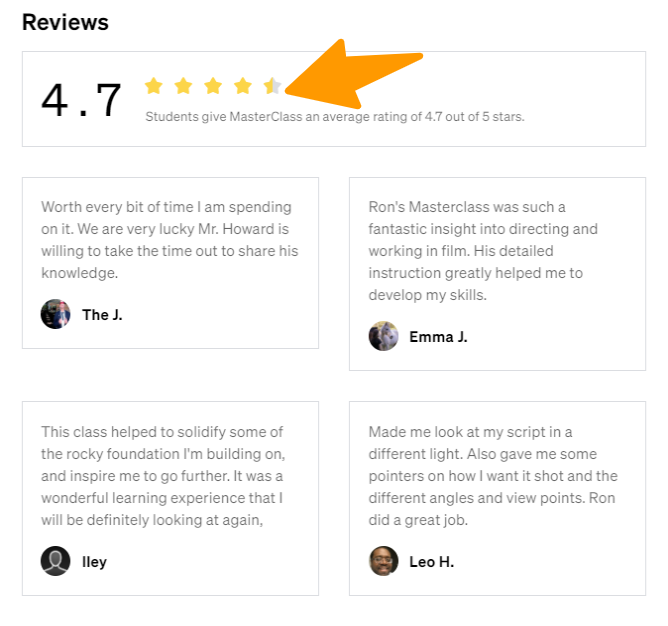 👉Get Started With Ron Howard Now

Now that you know about the tutor, let us move forward into knowing what the course is offering. Through this video, I would not only tell you more about this Directing masterclass but you would also get some great glimpses into what this masterclass offers. So make sure you watch it till the end!

Ron Howard made his first film in 15 days with $300,000. Today, his movies have grossed over $1.8 billion. In his first-ever online directing class, the Oscar-winning director of Apollo 13 and A Beautiful Mind decodes his craft like never before. In lessons and on-set workshops, you’ll learn how to evaluate ideas, work with actors, block scenes, and bring your vision to the screen. In this masterclass, Ron Howard teaches, directing, editing, and storytelling throughout his lessons.

Now coming to this masterclass.

You start this class from the class trailer and introduction. Moving on to knowing about the tutor and then diving straight into the various sections of this class.

This masterclass has 7 sections and 31 subsections.  Every section is perfectly divided into knowledgeable lessons that are approximately 10 minutes long. If you are looking for an exciting learning session then you should definitely take this class.

Ron Howard has so much to offer and this masterclass is for more than 7 hours long. Yes! You heard me right. Ron Teaches you for a total of 464 minutes. And you get to learn directly from him. And the best part? You can complete this course at your own pace.

Along with great lessons you also get access to a wonderful workbook. This 39-page long workbook has all the class-related materials, lesson recaps, assignments, supplementary materials, and tips that Ron has shared throughout the masterclass. Don’t forget to download it before starting.

Ron Howard Masterclass: A walk through each section

Now let us take a look at all the sections and peek into what each section has to offer. I will also brief you about what each lesson offers.

The first section is the Importance of a story. Director is always the keeper of any story. He is the one that strengthens the story. In this first section, Ron teaches us how we can strengthen the story that we want to tell. This section has 4 chapters and is 43 mins long. Let us look at what each lesson has to offer. 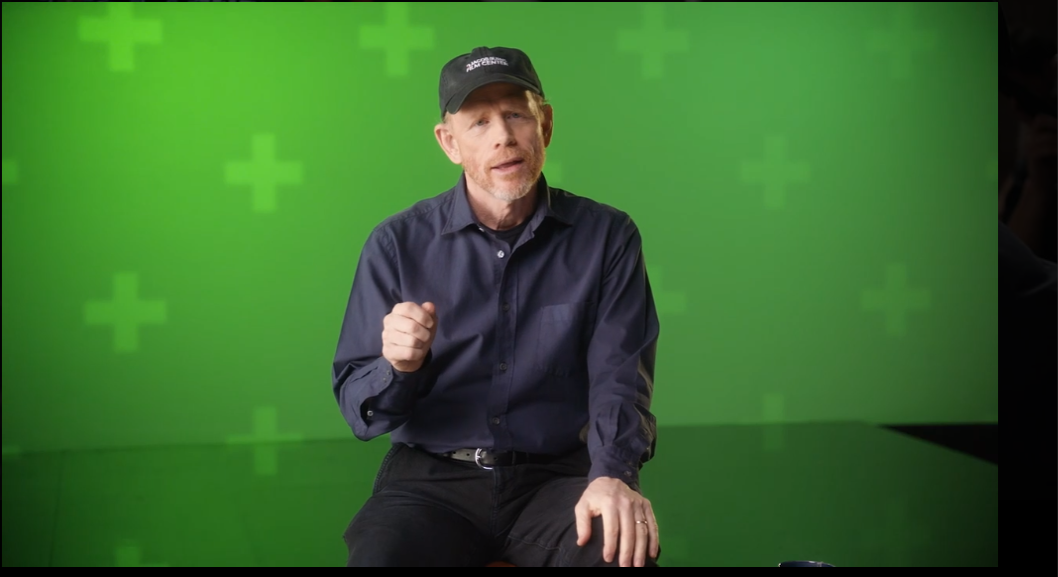 The second section is the Pre-production. In this section, Ron talks about all the key collaborators that challenge and help him reinforce all the decisions that he makes from development to the production phase of the film. This section is for 1 hour and 39 minutes and has & subsections. Let us look into each subsection and find out what each lesson offers. 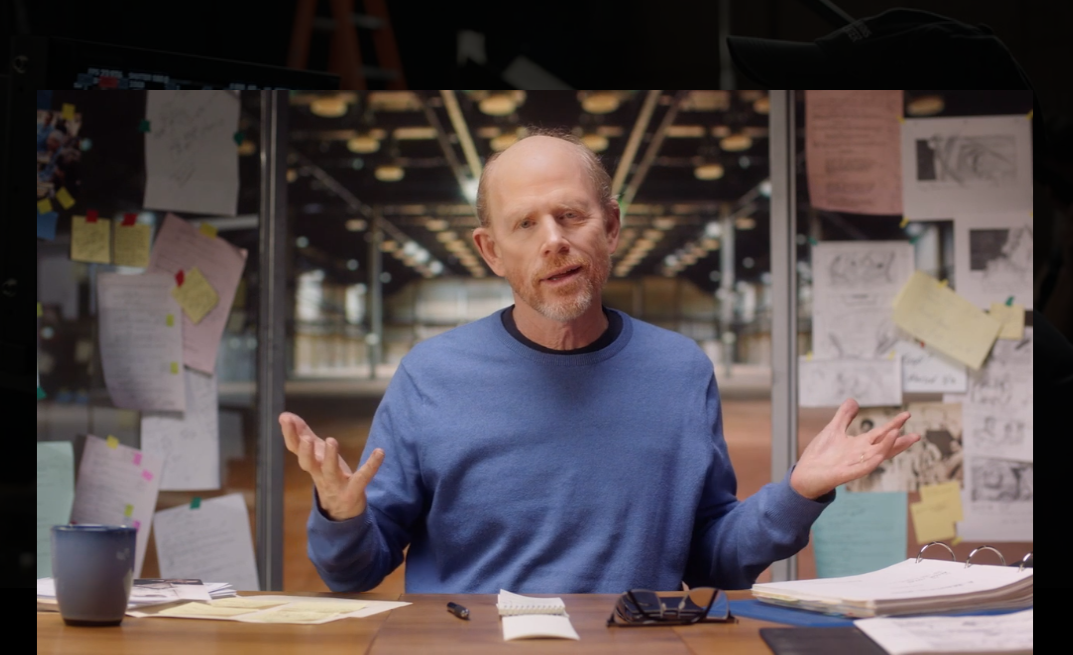 The third section is Scene Deconstruction. In this section, Ron tells us about the various choices that he made as a director by breaking down iconic scenes, the decision by decision. This is a very interesting section and gives us a deeper understanding of the three most iconic scenes by Ron. This section has 3 subsections and is 54 minutes long. Let us see what each lesson has to offer. 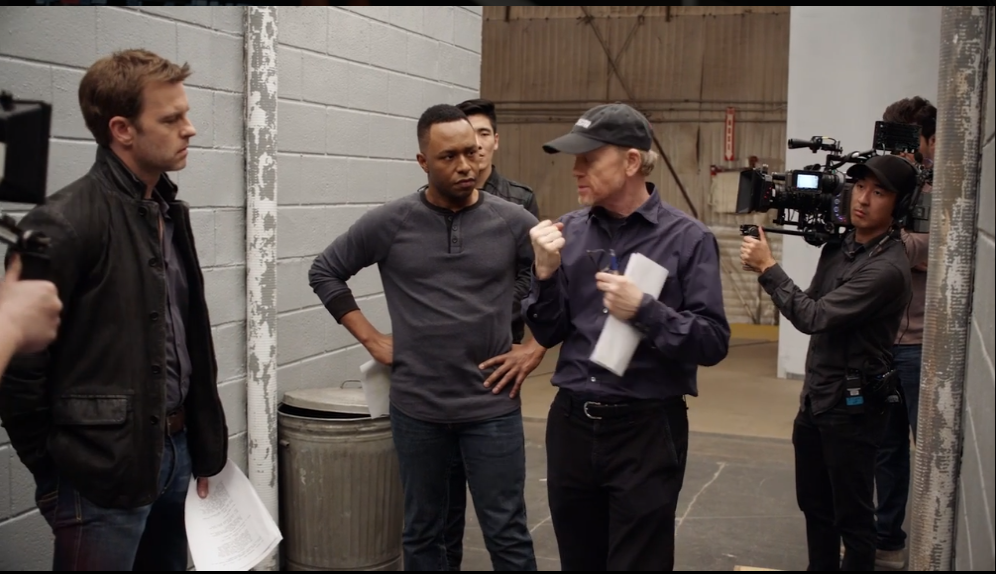 In this lesson, Ron helps us to get a better understanding of the shot and the mechanics behind them.

The Fourth section is Working with Actors. In this section, Ron teaches us how to protect and inspire the actors in our play. He also guides us in creating great plays. This section is 42 minutes long and has 3 subsections. Let us have a look at each lesson. 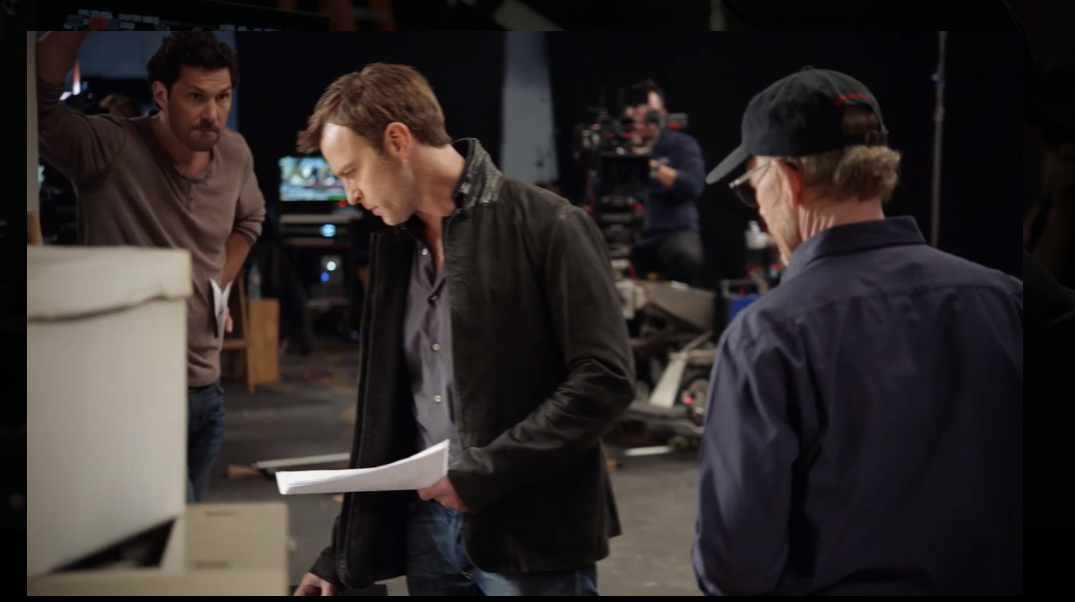 The fifth section is Watch Ron Direct: Frost/Nixon. You will be watching Ron share his experiences while directing his 2008 classic Frost/Nixon. Ron offers a rare opportunity to watch his process in action as he blocks actors and plans each shot. The section is about 3hrs long and is divided into 9 subsections.

The sixth section is Post- Production. In this section, Ron teaches us how we can sharpen our story by editing and adding sound effects, and using other techniques. This section is so important as it helps us add the final touch to our movie. This section has 4 subsections and is 44 minutes long. Let us take a quick peek into each subsection. 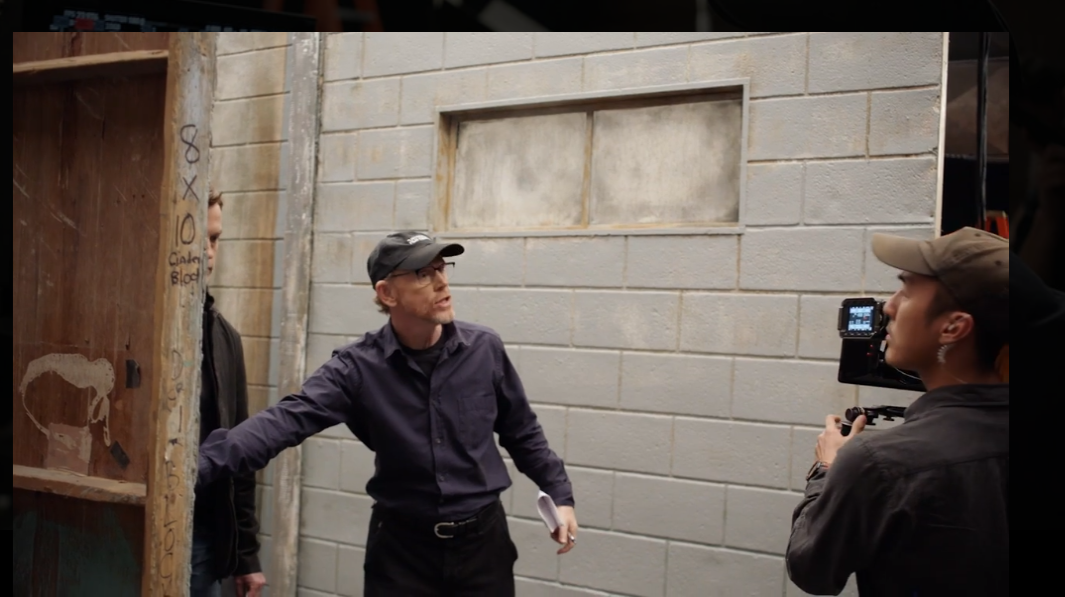 The seventh section is parting words. It is a 2-minute lesson named Find a story you love, In this lesson, Ron concludes the masterclass by sharing his words of wisdom. Ron asks you to be open to the moments and experiences that inspire you. And he also asks you to always find a story that you love and tell it without hesitation. 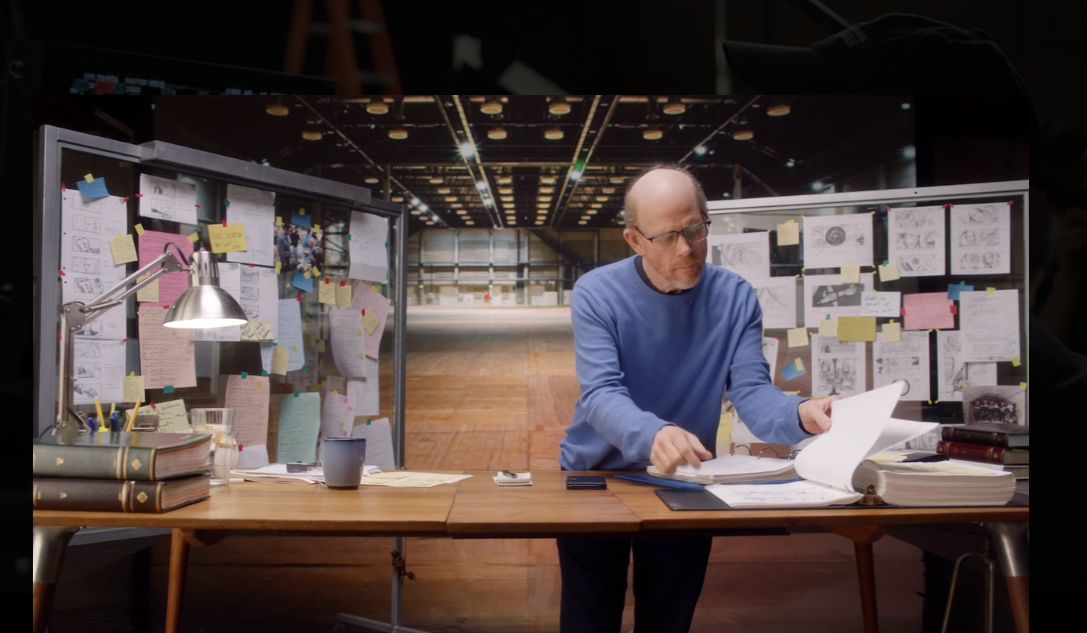 Who should be taking up this course

Now that you know what each section is about, let us discuss who should be taking up this course.

Even if you are a director and want some important lessons from Ron, you can take up the course. This course is full of knowledgeable lessons and will definitely help you level up.

This is a one of a kind masterclass so everyone who watches it is definitely going to benefit and take away many lessons from Ron. 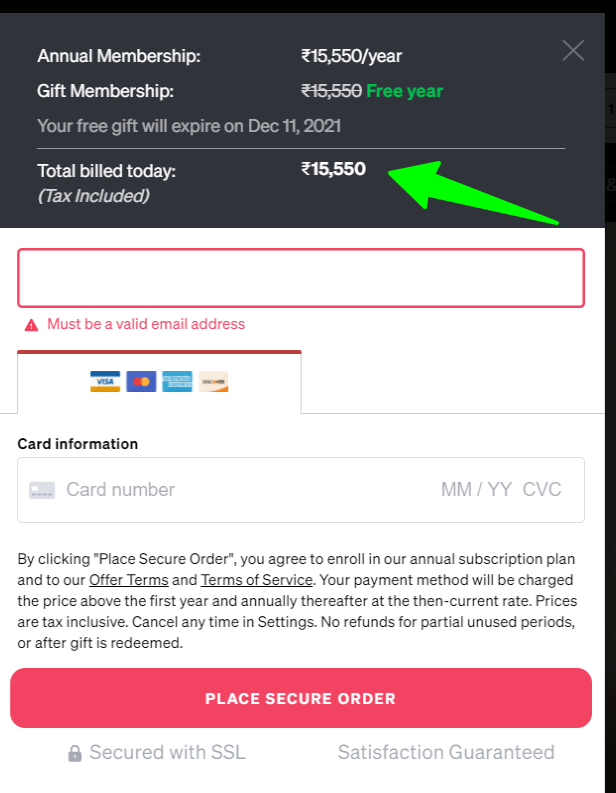 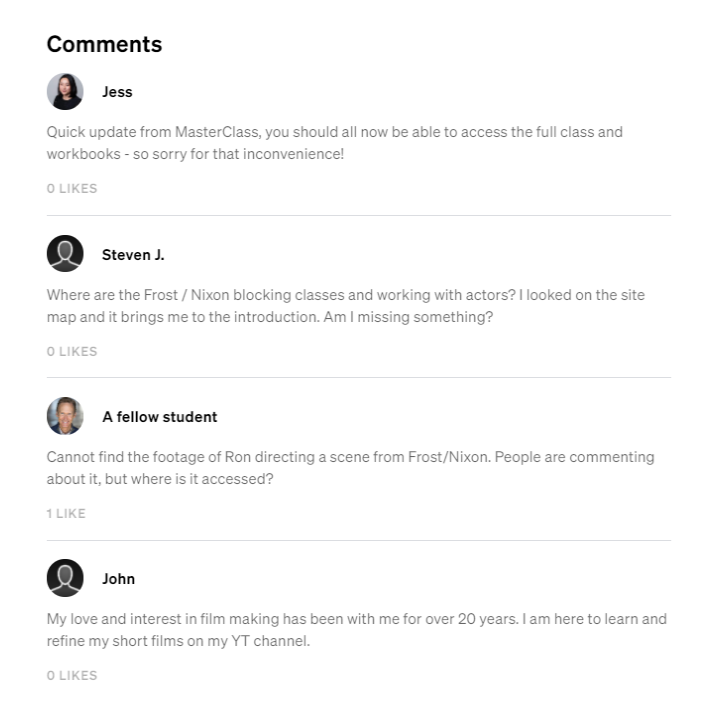 I have always been curious about directing, how scenes are shot, and how the movies are made is something that always had my attention. Even though I am not an aspiring director, this masterclass has taught me many lessons about the art of directing which will always stay with me.

I have also been a huge fan of Ron Howard for a long time now and as soon as I heard of this masterclass, I straightway enrolled for it. This masterclass has been definitely worth it for me and I am sure this is going to be useful for you as well.

👉Get Started With Ron Howard Now

So, I hope you guys enjoyed the review and serve your purpose well.

We would love to hear your thoughts on the same in the comment section below.

Also, I highly recommend the Directing masterclass by Ron Howard and if you wish to pursue please go ahead without any second thought.

Andy Thompson has been a freelance writer for a long while.Her passion in writing is her main drive in crafting articles that are engaging, informative, and meaningful. Her passion with blogging and digital marketing has given her a whole new opportunity to take writing to a whole new level.