No doubt, we all probably use the worlds biggest social network called Facebook. We all are familiar with Facebook and as it let us share our daily moments along with many other things with tons of features loaded. Facebook is available on the web as well on Android and iOS devices. But unfortunately, there is no official desktop app.

Facebook initially released Facebook Messenger on August 2011, here messenger provides instant messaging service along with software application. For instance, you cant use many Facebook accounts on the official Messenger app. It may happen that you want better notification on a desktop and even the browser extension.

No problem, third-party developers are there to help you out with this problem. So here in this post, you will get Best Facebook Messenger Apps for Desktop and Mobile.

This is one of the easiest ways to access Facebook Messenger Apps on a desktop computer. Here Messenger for Desktop is a free tool for all major operating systems (OS) as it lets you do everything like making calls to friends, sending chat stickers and many more things. This software bundle is regularly checked for viruses along with other types of malware.

Don’t worry all your personal details and integrity of your operating system will never be compromised. The main advantage of having this app it can also work with standard desktop computers. This software is specially designed to work with both 32-bit and 64- bit Windows Operating System. Here it also comes with 32-bit Mac OS formats along with 64-bit option are available.

Check Out Messenger For Desktop Now

Here, Franz is a fantastic cross-platform tool which is an all-in-one app for many instant messaging services. From my point of view, run Facebook Messenger with Franz because it integrates with Linux well. The best part of having this amazing software is you can run multiple Facebook Messenger accounts.

If you are willing to set up another Facebook Messenger accounts just click the Franz icon and choose the Messenger under Add New Service. You have the liberty to add as many accounts you can. 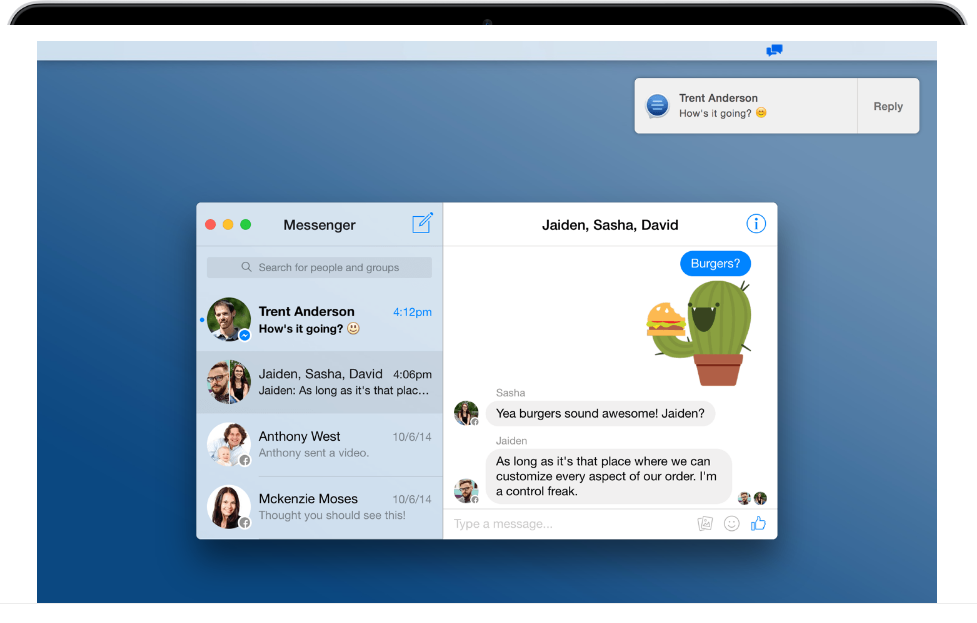 Here comes the Current for Mac as its name suggests, this software is only available for Mac users only and this is not available on other platforms. Current is more than about Messenger, as its one of the best Facebook for Macs. This awesome software comes with two special features for Messenger.

Basically, this first on is Current works from the Mac Menu Bar, due to which you can just click the little icon at any time and you will get a tiny window just to browser your Messages. But the second is the latest and cool part, as it lets you separate chat windows so that you don’t miss any message along with carrying multiple conversations at the same time while doing other things.

Check Out Current for Mac Now

As Mozilla’s Firefox has an amazing Facebook extension. Here Firefox sidebar is customizable and the extensions are like an all-in-one sidebar that will let you make the most use of it.

Here, Firefox Messenger add-on will need you to sign-in with your FB account. Once you are done with the log-in process it will work as the mobile version of the Facebook Messenger app. With this amazing software you can make voice-calls and many more things but before accessing that features you have to accept the Terms and Condition. Don’t worry, it’s really simple to use this software along with the handy extension.

If you really prefer Chrome to Firefox, then here you will not get the sidebar. But here you will get an always-on Messenger window. Its all through the built-in Panels feature, here you will have to enable it before using. You will get a tiny window popup which can be used outside of the chrome.

All you need to get do is just log into Facebook and you will be able to start chatting with your friends. The best thing is that it doesn’t matter which tab you browse, Facebook Messenger Panel will be at the top or it will be minimized right where the status bar will be.

Here the Facebook Messenger is quite good for iOS, especially with the features like Chat Heads. But the worst part is that you can only use the single Facebook account. But if you really want to use multiple accounts here then, you should use an app called Friendly Social.

Basically its a free Facebook app, which not particularly made for messenger, but the best part is that Facebook Messenger part will work perfectly. Now you are not just limited to one Facebook account, set up as many accounts as you can and switch over one another instantly.

Are you fed up with allowing Facebook Messenger for many different aspects of the phone? Sometimes you are not even sure before allowing it, you may think what it needs that access or when it will be going to use it.

Here comes the Lite Messenger, which really focuses on giving you control instead of Facebook. Lite Messenger will require no access to your personal data. It supports notification, looks pretty good and comes with many magnificent features.

An example of that you can easily switch on setting that will stop another know that you have seen their messages or not. Here you will also see many other features too, so just go ahead and get started with this app on the android device.

It’s not only Facebook everywhere in the market, there are many other fast-growing social networks. So you can find many other instant messaging apps rather than Facebook Messenger. You should also get started with WhatsApp, Viber and Line and many others in the market too.