THE BIRTH OF GOOGLE AND ADWORDS

The launch of first banner in 1994 many of the advertisers had to display their ads on hundreds of different websites to capture the most traffic.1990’s new central hub which also attracted millions of users was born, a search engine and invention of search engines allowed advertisers to do much more than the target users based on their search intentions. Before Google in 1990 one had to rely on yahoo and goto.com in order to find the websites.

Advertisers were also able to determine that from where the customers are visiting their websites. The service also quickly changed to a cost per interaction or cost per click model. It also spawned the birth of pay per click advertising model and the most widely used and popular advertising methodology. The other advertising models in the earlier days were fixed at the monthly cost.

Basically, click fraud arises due to advertisers are being charged for every click on their ad by fraudsters and bots. About 1 in 5-6 clicks on adverts were found to be fraudulent and the number slowly started increasing every month.

In simple and easy words click fraud can be defined as the fraudulent clicking of pay per click adverts to generate fraudulent charges for advertisers. And if you are having sufficient data and continuously monitoring the keyword closely then there are high chances of noticing a change in the performance as well as alerting about the something shady might be going on to the screen.

Generally, it is a type of fraud that occurs on the internet in pay per click or online advertising. In this, the owners that post the ads are paid with an amount of money that is determined by how many visitors to the sites clicks on the ad.

Usually, click fraud can take many forms but in order to get to know who is responsible for the click fraud we need to know about the 4 most offenders and they are as follows:

In order to see that Google is worth or not we need to undergo with following:

As Google Adwords is the most worth it. As not only it allows businesses of any size to advertise but it is not so expensive it is also providing the flexibility to the businesses. As compared to other forms it is easily well known that Google Adwords is more popular. It is only worth it if ads receive genuine clicks from customers. Talking about the PPC world most of the clicks are fraudulent and many of the users have no intention to buy the product. It will cost you a lot in the long run and can increase your per cost conversion.

WHAT ARE INVALID CLICKS?

Invalid clicks can be defined as these clicks where probably fraudulent or fake in some way or the other. No doubt Google does not use the word fraudulent but instead, it suggests they are unintentional clicks from non-legitimate users.

Some of the most common examples are as follows:

As from the above examples, it is clear that no advertisers would want to pay for those types of clicks on their campaign. If you are charged for the accidental clicks then you have every right to be annoyed. As an advertising network, Google needs to make their advertisers happy or otherwise, they will stop spending money on them. Google also refund the money for the invalid clicks they receive on it.

In order to identify invalid clicks Google has its own sophisticated system which analyses every click your ad receives. Whereas the details found for this are actually unknown.

Many of them speculate that it takes a number of factors into consideration when trying to determine if a click is legitimate or not. These also include time IP, address, and device ID of the users to name a few.

With the help of an extensive database of information from millions of other users who are running a campaign, Google has plenty of information to work with when it comes to determining whether a click is genuine or not.

DOES GOOGLE BLOCK ALL INVALID CLICKS?

As Google has the information of millions of people from all over the world and you can assume that they can easily be able to block all invalid clicks. The invalid click detection algorithm of Google is very slow and often takes a few clicks before an invalid click is detected.

Google is still saying for the willingness of offering you the refund or not which means that there might be a lot of invalid clicks through the net and also costing you money. Google has also introduced its own invalid click investigator which allows users to report suspicious clicks to Google that they had been charged for. The investigator also guides you with a series of questions and when if they require more data for the investigation Google will mail you with the direct answers.

The chances of receiving the fund from Google is extremely low. When even you have substantial evidence and proof backing up a click is invalid and you will be left scratching as how you did not get the refund.

HOW TO STOP INVALID CLICKS IN ADWORDS?

An advertiser who uses Google Adwords blocking of as many invalid clicks as possible should be the priority number of yours and when if you are thinking that Google should perform for you then there might be chances of lifting out with the pocket and disappointment too.

There might be chances that Google gives you a free refund for your invalid clicks but it is only for those who detect. In Order to stop the invalid clicks from costing you money, you have to take things into your own hands and also have to increase the protection. We should thank to Adwords exclusion list which makes the possibility of creating their own block list and stop certain people from seeing your ads.

What is ClickCease And How it can Help You? 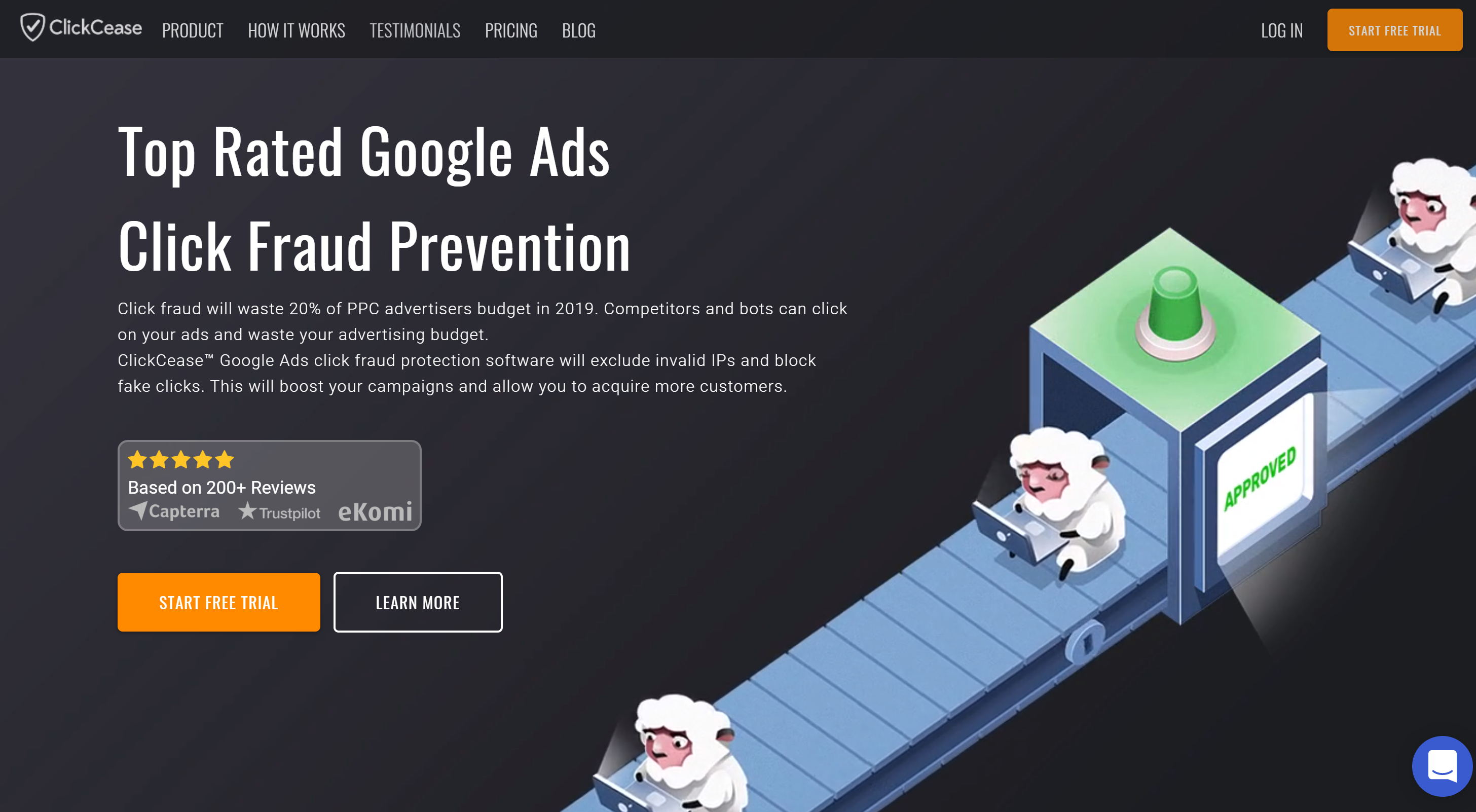 HOW DOES CLICKCEASE PROTECT DEFEND YOU FROM CLICK FRAUD?

Auto IP blocking algorithm- talking about click fraud fraudsters always thinks up new ways to avoid detection. But earlier clicking on advert results in a charge to the advertiser and they could repeat this until their IP address gets blocked. It also means fraudsters using botnets and other means to change the IP address will be instantly detected and blocked.

Wide range of fraud detection factors- monitoring of every individual click on the adverts using a range of detection factors and no longer can fraudsters evade detection by changing their IP. There is also an option to tweak the rules to a specific industry or niche. The factors such as frequency, unique browser headers, and other fingerprints repeat clicks can easily and quickly put the user on the block list. 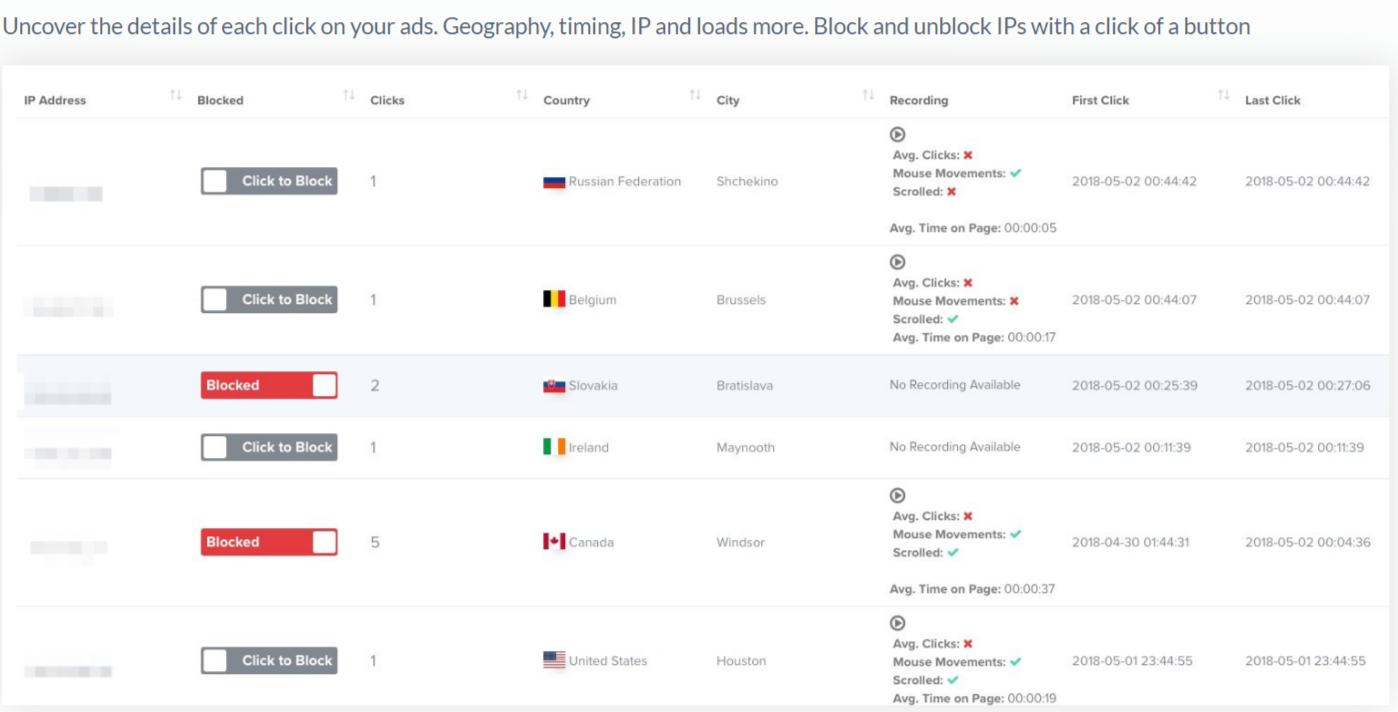 24/7 click fraud protection- it has been built from the grounds in order to ensure that everything is 100% automated.there is no waiting for approvals for the offices to open as everything works perfectly 24/7. It also includes machine learning which allows the software to constantly learn and helps in improving the detection rates. 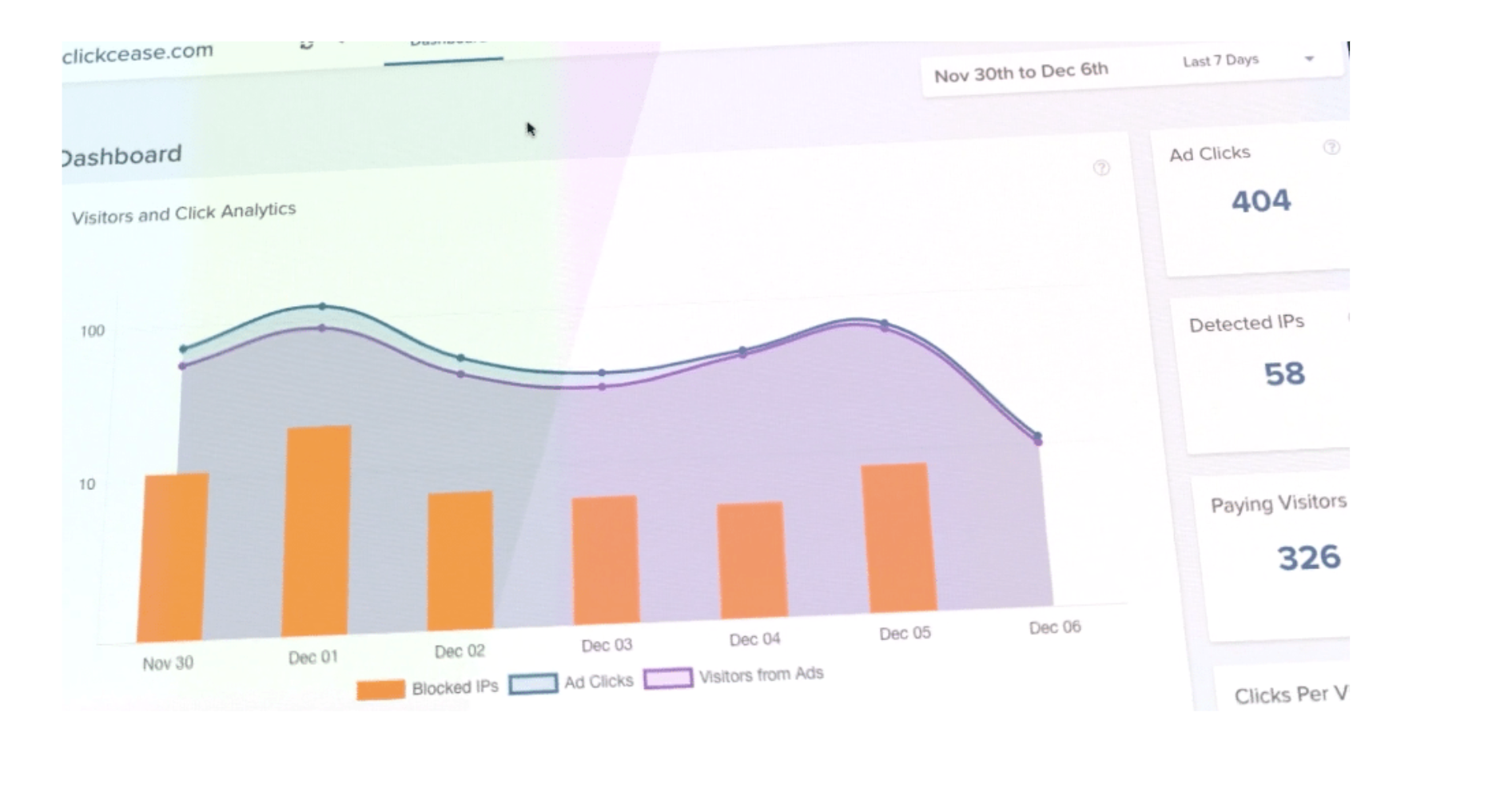 Enterprise infrastructure- with the enterprise great servers to the powers of software one can stay easy by knowing no matter how clicks you are getting because they are handled by our servers.

Protects you from Adsense attacks- it is a great feature of ClickCease which gives protection to the industry from Adsense attacks. Whereas others only protect from Google search attacks but it will protect you from fraudulent webmasters. The display of the network experiences a much higher rate of click fraud because the ad can be shown on any of the external websites without the consent of the owner. 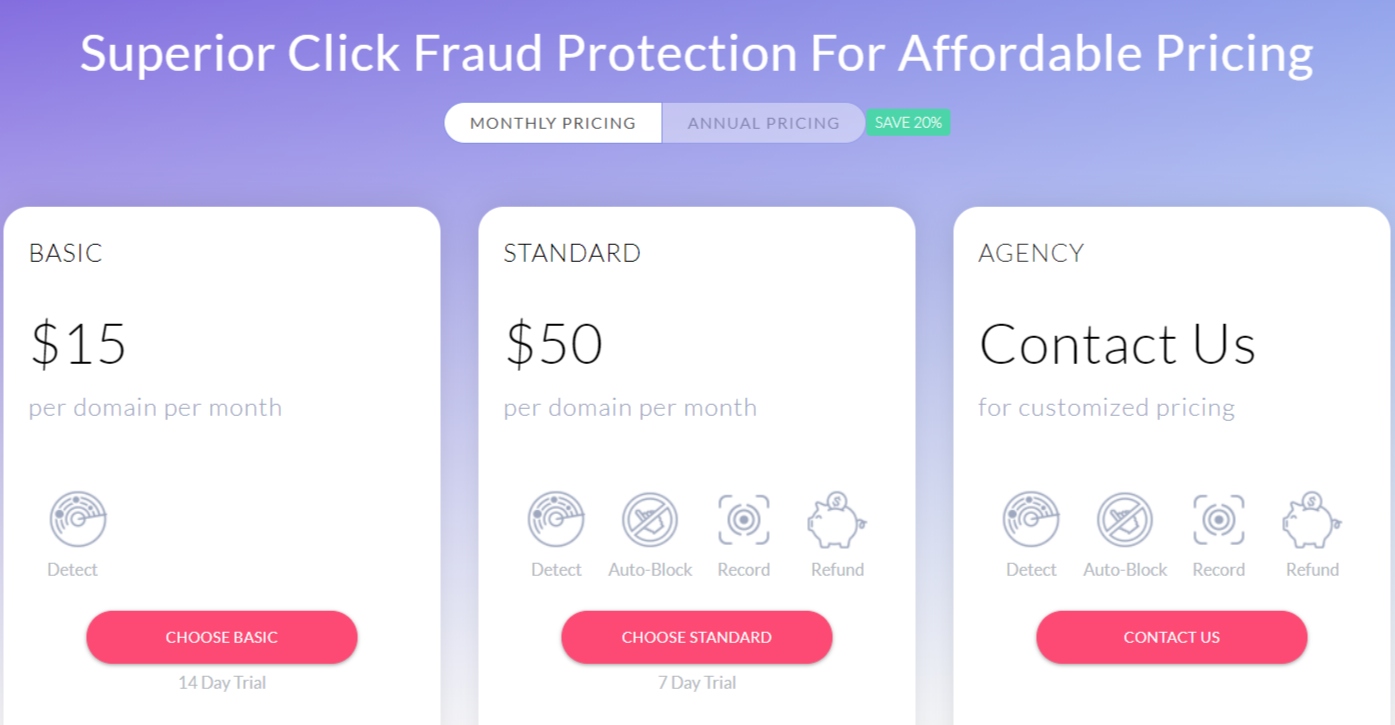 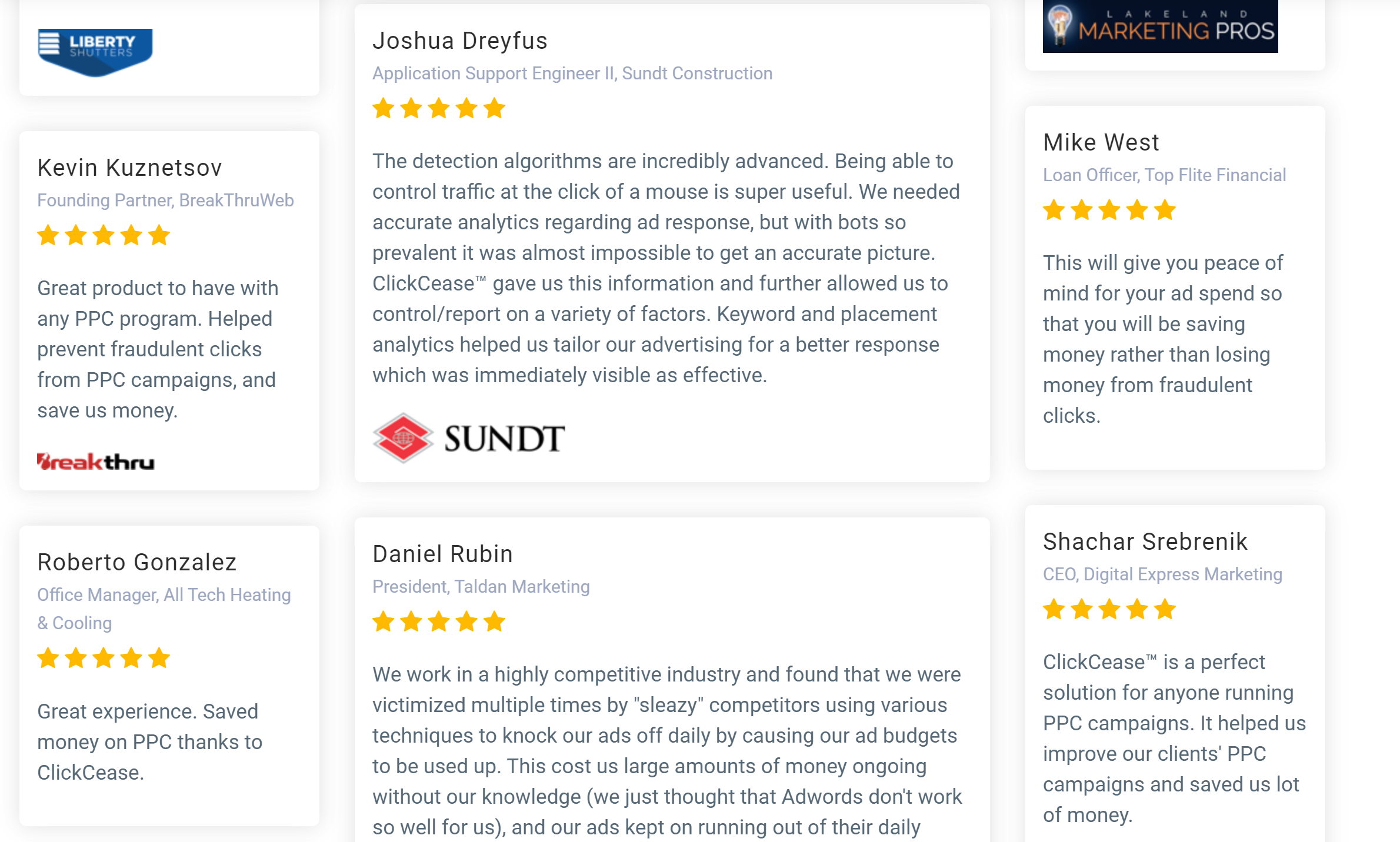 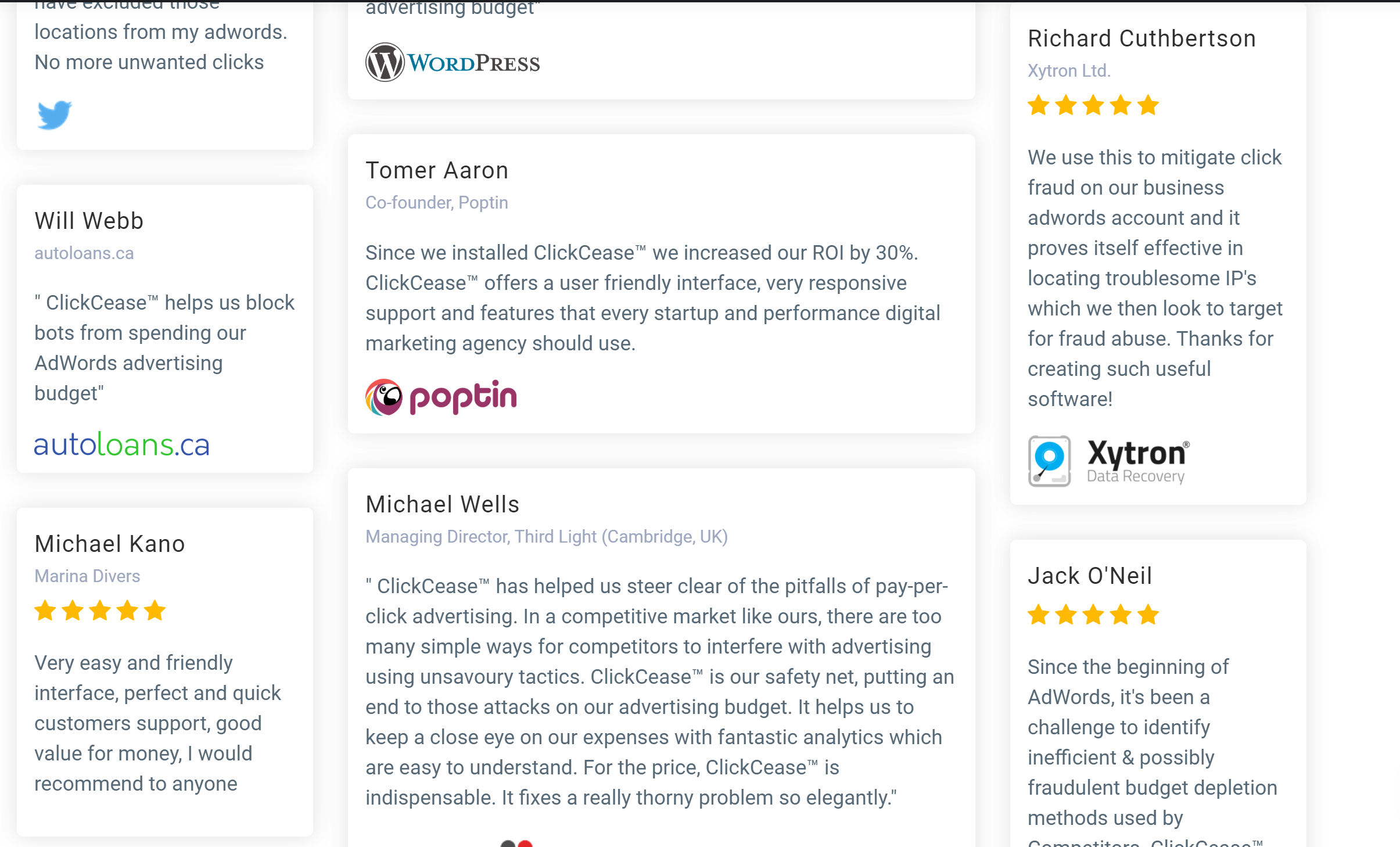 We work in a highly competitive industry and found that we were victimized multiple times by “sleazy” competitors using various techniques to knock our ads off daily by causing our ad budgets to be used up. This cost us large amounts of money ongoing without our knowledge (we just thought that Adwords don’t work so well for us), and our ads kept on running out of their daily budgets. For a smaller business, this can be crippling. The ClickCease™ tool was able to put an IMMEDIATE stop to our issue, and we started to see a climb in our quality of traffic through our paid campaigns. This allowed us to expand our campaigns, further increasing traffic to our site, thereby realizing higher conversion amounts. Let’s face it, when you cut through the numbers, any small business wants to see as quick an ROI as possible on dollars spent. ClickCease™ is an integral part of our ongoing online advertising budgets. When you are able spend more of your budget on REAL traffic, you will get more conversions… period.

Setting up our account and monitoring system with ClickCease™ was a breeze. We immediately began seeing the results reported to us regularly, and saved on our Google AdWords click costs. I own 2 businesses and have used ClickCease™ for one of them for over 2 years. Our savings on AdWords for even our smaller traffic website (2000 visits / month avg) far outweigh the cost of subscription (we’re saving hundreds of dollars a month on only a $3k/month AdWords spend). What’s more, they recently added a competitor tracking feature that we have found extremely useful. On top of this, I would like to commend the customer service team for their speedy responses, attention to detail, and all around great attitude. Whether by email, or on chat (shout out to rep – great work!), the ClickCease™ team is always ready to help.

CONCLUSION: How To Stop Bot Click On Google AdWords

As the technology is increasing day by day the fear of click fraud is also a growing problem that is causing the great impact to millions of people and businesses worldwide rather the size of business.and the battle of click fraud is running from many years.fraudsters are always coming up with a new idea and a plan.

As the click fraud is continually on the verge of increment it is only a matter of time.

Invalid activity typically also relates to the traffic that you receive on your websites and then you subsequently click on those ads. Traffic sources also lead to the fraudulent and are considered as published to influence the earnings.

ClickCease can easily help you in blocking click fraud and it is a reliable software. So you can easily rely on this tool in order to stop click fraud on your Google Ads easily and effortlessly.