Truth is stranger than fiction as per an old maxim. I agree as it applies to the story of Let’s Barter perfectly.

An average introvert guy, Sahil Dhingra normally bunked school, doing all sorts of mischief without ever participating in worthwhile activities. All because he didn’t know what he wanted to do in life. He took admission in a law college, hoping that was his calling, since everyone in his family aspired to be a lawyer. But after 3 years of college, he realised did not enjoy the course since I had chosen it without introspection of my abilities. 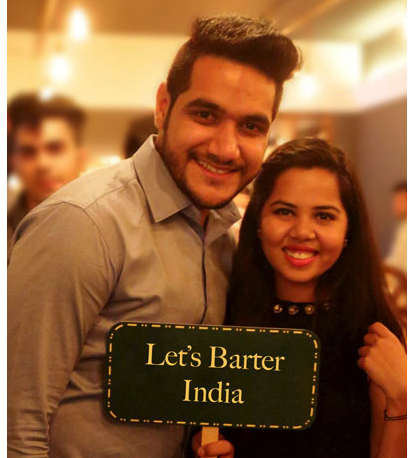 Quitting studies midway, he joined his dad’s business where he came up with the idea of MEDIROOF: his first start up that envisaged providing all medical facilities under one roof. Unfortunately, it failed due to his inexperience, lack of skilled staff and technical glitches, burning Rupees Fifteen lakhs of precious money with no tangible results.

It was for Mediroof that he met Pooja Bhayana, an old school friend, and during a drive back home, they struck upon the idea of bartering goods, thereby forming a FACEBOOK group of friends who were enthusiastic about the idea.

Pooja meanwhile had come back to India after studying in Singapore, and recently quit a well paid job after two years of PR, to look for happiness. When she quit, she didn’t know anything about what she was going to do. She just knew two things: She wanted to create something new, something from a scratch and it had to be something that would make other people happy. When she spoke to Sahil about Let’s Barter, it was a moment of happiness and the search ended.

The idea of Let’s Barter eventually grew up to a great success, enabling them to launch LETS BARTER through the Facebook community. Initially, of course, the going was tough. They had no funds to invest so they lived frugally to run the LETS BARTER platform. It was primarily because of this reason that they chose Facebook community to promote our idea with the campaign “What to Barter” on Canva, designing posters and graphics ourselves.
On the second day itself, Let’s Barter registered their first barter of an audio system against a 32 inch LED TV. What was most exhilarating was that within a week, the group notched up 27000 members and then it went up to 50000 within a month. Thus, Facebook became the main source of business development and revenue too.

And hence, for the growth of Lets Barter, they built a new website, www.letsbarterindia.com, with added features to eliminate the loopholes and enhance the connectivity.

Check out their Video :

Their advice to start ups and young entreprenuers:

Pooja: It took me quite some time to realize that what matters is that you be the best version of yourself; unique and different. I don’t think I have achieved many of the milestones that I wanted or I am yet the best version of myself. But it is a work in progress that is moving in the right direction.

Sahil: The only thing I wish to convey to young aspiring entrepreneurs is that, we could have chosen to live a comfortable life but we chose a life of struggle. “All that glitters is not gold” and though it may seem that entrepreneurs live a luxurious life, yet success is made up of hard work, struggle and conquering a lot of bad times.

I hope you enjoyed this story and get inspired by it. Need more stories like this let us know in the comments.